Poet Laureate of Kansas and mother of Elizabeth "Grandma" Layton 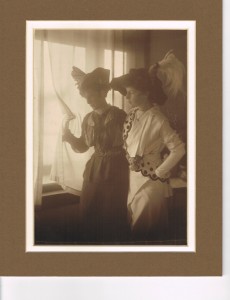 May and Maude Frink, twins

May Frink Converse was a widely known poet and writer who was loved throughout the state of Kansas.  Each week for thirty-five years she furnished one of her poems and also material for a column called Convers-ation for the Wellsville Globe of which her husband, Asa F. Converse, was editor and publisher.  Her contributions to the paper were a vital interest toher and an inspiration to her readers.  During the years she published two books of poems.

May Frink Converse was crowned Poet Laureate of Kansas in 1928.  In addition to her weekly contributions to the Wellsville Globe many of her poems appeared in the Kansas City Star, the Topeka Capital, and a number of magazines.

May Frink and her twin sister, Maude Frink, were the daughters of Asa Adelbert and Laura Elizabeth Belts Frink.  They were born May 12, 1877 at Frinkville in Brown County, Kansas.  The twins first attended country school and later the new school at Fairview.  After completing the local schools the twins attended the Academy at Ottwa University and took part of the college course there.

In college May Frink became acquainted with her future husband, Asa Finch Converse and they were married June 5, 1900 and settled in Wellsville where the groom owned the weekly newspaper.

She loved to write and was encouraged by her husband.  May had not been given a middle name, so when she needed a signature for her writings she chose to use her maiden name for that purpose, thus the name May Frink Converse.

Mrs. Converse and her husband were the parents of three children: Adelbert Frink, Carolyn Maude and Elizabeth Hope.  She passed away December 5, 1957, at the age of 80 years.