Standard maps of Franklin County summarize the relationship between the eastern emigrant Indians who were removed to Kansas when it was the “permanent Indian frontier” in the 1830s in this way: “In the following years the land was given to many Indian tribes for reservations, most of whom gave it back.”  This statement implies that the Native Americans were either too ignorant of the value of land or too dispirited to accept the challenge of making the removal site a home. In fact, neither is correct. The area which is now Franklin County was home to the largest assortment of relocated Indians in Kansas—the Peoria, Piankeshaw, Wea and Kaskaskia, the Pottawatomies, the Sac and Fox, the Chippewa and Munsee, the Ottawa, and numerous others who were relocated here during the Civil War due to Confederate raids on their Oklahoma lands. These included the Quapaws, the Senecas, the Shawnees and the Osages.

Many of these Native Americans were very canny observers of the US Government’s Indian policies, and while some struggled to maintain their aboriginal cultures, others sought to hasten their group’s acculturation into “white” society.  Whatever their choice, the tide of European settlement was touching on this area by the late 1850s and early 1860s. Soon, none of the emigrant Indians would remain in Franklin County but the Chippewas who had resisted missionizing and the Munsees who had settled in the less-arable area of the Chippewa Hills,

Shaw-Paw-Kaw-Kah, a Sac and Fox, attended the treaty negotiations in October, 1859, which were initiated by the US Government to decrease the size of the Sac and Fox reservation, which at the time occupied western Franklin Co. and all of Osage County. Knowing that he could not prevail in his resistance to the treaty. Shaw-Paw-Kaw- made a speech, translated by John Goodell, which said:

“I submit to the commissioners and the Great Father that the whole arrangement from the commencement to the end,, is to consume our treasury, and to give into the hands of speculators our money and our lands, to make us poor and dependent, and to degrade us, and finally to take our lands from us that we own here. We will eventually have to surrender this diminished reservation. We will have to give up the graves of our fathers and mothers, and their bones will be dug up, and the sacred emblems that are buried with them will be made a show of by the same men that call us heathen, and are trying to teach us a new religion. Even now we have to hide our dead ones. Their graves have been polluted. We find their bones on the roadside and in the windows of offices in our midst.

You will waste $5000 a year on the mixed-blood children, whose fathers are the very worst of the white race and the refuse of the earth. They brought to the agency whisky and tobacco and taught the Indians to swear, and their children have proved universally bad.

Of course, I will be compelled to sign these papers, but I sign under protest, knowing in my own heart that there is no good in it for the Indians.” 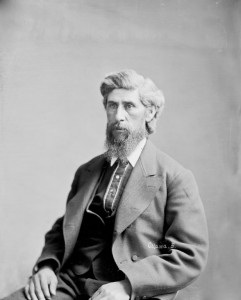 An Ottawa named Ko-tow-wan, was known as Joseph Badger King. He tells how the Ottawas were hoodwinked into agreeing to the treaty which traded their Ohio lands for those in Franklin County. “These Ottawas were very loath to leave their old homes in Ohio, but there were scheming land sharks who coveted Indian possessions in those days, just as there are now. I remember that one old village chief, Thunderbolt by name, positively refused to sign away the lands of his people. The land grabbers finally succeeded in making him drunk and, while he was in that condition, they took him by the wrist and caused him to touch the pen by which his mark was attached to the document.  Thunderbolt was furious when he became sober and learned what had been done, He not only denounced the means used but he repudiated his signature and flatly refused to go when the time came for the tribe to take up its long journey to the west. So he was tied, hand and foot, and thrown into a wagon.”