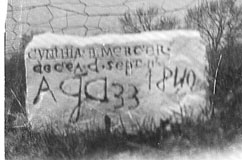 Cynthia Mercer’s tombstone is the oldest known in Franklin County.  Who she was has been something of a mystery over the years, especially since the stone seems to hold a story on its surface.  The name “Cynthia Mercer” is engraved into the stone in a neat, small hand.  However, the remaining text seems to get wilder and more juvenile as it goes along.  A story was told that her husband started to make the tombstone and then also died, leaving the text to someone who was much less skilled in the craft.

The Lane area of Franklin County plus large parts of Linn and a strip of Miami Counties were, beginning in the 1830s, a reservation for a band of Pottawatomie Indians removed from Indiana.  These Indians were moved again to Shawnee County in 1848.  During their time in this area, there were at least two different missionary outposts for them—a Catholic mission on Sugar Creek (in Linn County) and a Baptist mission on Pottawatomie Creek, southwest of the site of Lane.  It was to that mission site that Cynthia Mercer came.

Among the Baptist missionaries who had worked among the Ottawa, Pottawatomie and Chippewa tribes in Michigan Territory in the 1830s were Moses and Eliza Merrill, Isaac and Christiana McCoy, Robert and Fannie Simerwell, and Jotham and Eleanor Meeker.  All of these worked at the Shawnee Baptist Mission in Johnson County, Kansas Territory during this time.  Reuben Mercer, a younger worker in the cause, lived in Jackson County, Missouri, and Jotham Meeker boarded his mother with Mercer and his new wife, Cynthia Burr Mercer.  The two had been married at the Merrill’s Otoe Indian Mission near Council Bluffs, Nebraska Territory in 1836, and the marriage was recorded in Jackson Co, Missouri, the next year.

Mercer was hired to build the mission buildings at the Pottawatomie Baptist Mission (south of Lane) in 1840.  His wife accompanied him to the wilderness, and succumbed to some unknown disease or ailment while there.  Jotham Meeker records in his diary of Sept. 12, 1840, that he had just learned of her death, and on Sept. 13 he and his daughter Maria traveled from the Marais des Cygnes River down to Pottawatomie Creek to conduct the funeral service.

Reuben Mercer didn’t follow his wife to the grave immediately, though he disappears from sight in this area.  In a letter from him to Eliza, widow of Moses Merrill, dated Dec. 1, 1842, he is still suffering from the loss of his “dear companion” and wife, Cynthia.  He reports that he is staying in Milwaukee County, Wisconsin Territory with Cynthia’s mother.  He then appears from 1850 through 1880 as a farmer in Wisconsin, remarried to a woman named Endymion Barber, and the father of six children.

So, Cynthia joined the tide of young women who died young and were replaced with new spouses and new families.  It may not be quite as dramatic as the imagined tales, but her story can be coaxed from the silence of the unsettled spaces through research.

Delilah McCoy Lykins, daughter of missionary Isaac McCoy and wife of Dr. Johnston Lykins, died at this mission in 1844 and is buried near Cynthia Mercer.