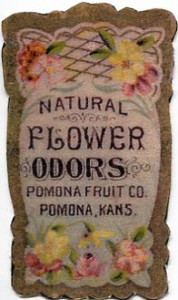 Death, and Volstead, caused the suspension of one of Franklin county’s most vigorous and prosperous industrial enterprises.  When the Pomona Fruit company stopped operations, and closed its doors along in 1922, it was the knell of a promising business wrecked by circumstances.  These circumstances were mainly the loss by death of the brains and vigor of the promotor of the enterprise, J.J. Whetstone, and incidentally the enormous increase in the cost of a vital ingredient in the product of the company, alcohol.

Probably few people outside of the little city where the fruit company conducted its manufacturing enterprise, are aware of the extent to which the business attained, in the comparatively few years of its existence.  It was in 1899 that the late J.J. Whetstone, of Pomona, began in a modest way to carry out a conception that had long been vivid in his mind.  In a single room of his residence he began the manufacture of a variety of fruit extracts, and when a sufficient stock had accumulated would go out to the neighboring towns and sell them.  The business grew rapidly, the quality of the product, and the attractiveness of the packages speedily making the Pomona product popular with tradesmen and housekeepers.  To the original small room was added the full capacity of the larger basement, and the scope of the manufactury was enlarged to provide for adding of jellies and preserves to the output.  The business increased as Mr. Whetstone extended his field, largely by personal visits to the trade, and in a short time special buildings were constructed and the concern was vigorously and successfully disputing with the older established manufacturers of the east.  Pomona extracts, jellies, and preserves, were acknowledged as good as the best, and were made on honor–the Whetstone management was insistent as to the point of quality.  By 1904 the little enterprise had grown from its one-room start with Mr. Whetstone the main dependence in factory and “on the road,” to a concern requiring a 2-story building 50′ by 100 feet, with several adjuncts.  By this time Mr. Whetstone was able to apply most of his time to road sales, and was covering a wide territory in the west.  The factory was in charge of the late H. Harrell, with a force of new experienced assistants.  In 1904 the force in the factory proper included: H. Harrell, Bert Ward, Mrs. Ward, Mrs. Jackson, Mrs. Parkinson, Mrs. Maxey, Flora Brubaker, Grace Wilson, Lulu Wilson, Millie McMurray, Pearl Cole, Fannie Krause, Tessie Fich, Rodney Here, Sadie Anderson and Mrs. Figgins.  A page from the production book for that year is of interest.  It shows that the average production per day of jellies was 635 glasses, requiring for the year a total of 68 barrels of glasses.  The year’s output of apple jelly alone was nearly 6,000 containers.

The enterprise was then well on its way to high commercial success, but met with a fatal loss in the death of Mr. Whetstone, to whose energy and business acumen the establishing and growth of the business was due.  In addition came the excessive advances in the price of the necessary ingredient, alcohol, for much of the product– the extracts–due to the national prohibitory act, the enterprise began to wane, and several years ago, on removal of Mrs. Whetstone to a western city, was abandoned.