From the Fall 1997 Head Light, the newsletter of the Franklin County Historical Society, Deborah Barker, editor 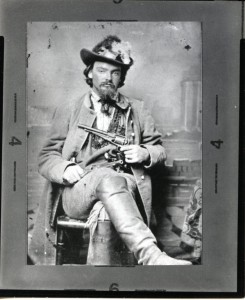 Edward E. Leslie, in his book The Devil Knows How To Ride: The True Story of William Clarke Quantrill and his Confederate Raiders, tells of the arrest of George W. Maddox, who was brought to the Lawrence jail on February 8,1866 [should be 1867]. The militia was called out to guard the jail. Mr. and Mrs. John Speer, who lost two teenaged boys in the raid that killed another 150+ Lawrence citizens, visited Maddox at the jail. They were clinging to the futile hope the one of their boys had survived the raid, and hoped that Maddox would have  information about him.

A change of venue was obtained and his trial was moved to Ottawa, where it took place in April, 1867. Leslie reports “the jury took just ten minutes to acquit him, which is either a stirring testament to the essential fairness of the American system of jurisprudence or an indication of the wholesale bribery of jurors.”  Mrs. John Speer attended the trial, according to the papers of A.P. Elder at the Kansas State Historical Society, with a pistol in her pocket, intent upon exacting her own kind of justice if Maddox was acquitted.

When the jury retired to deliberate, Mrs. Speer was invited to the P.P. Elder home to rest from the journey down from Lawrence. She missed the quick verdict and Maddox’ subsequent escape with his wife on fast horses waiting by the back door of the “courthouse.”

The Western Home Journal devoted a few lines to the story of the trial, insisting that the demands of space precluded adding any additional detail to the Quantrill raider story.

The Kansas Daily Tribune Summary of Evidence in the Maddox trial