Objects, either two- or three-dimensional, that have been selected, altered, used or made by human effort. Examples: 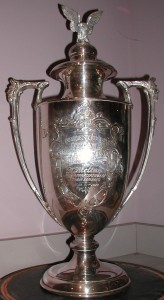 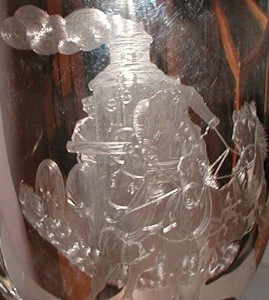 Artifacts–objects in museum collections–are tracked by means of a numbering system.  The Melluish trophy is numbered 1967.95.03.  This means that the Franklin County Historical Society acquired the object in 1967.  It was among the objects in the 95th group of objects acquired that year, and the trophy is the third object to be processed from that group.  The donor was the Ottawa Fire Department.

This large silver trophy was presented to the Ottawa Fire Department in gratitude for their assistance in saving the Melluish jewelry store inventory during a fire on 21 January 1912.  On one side the dedication is lettered and on the other is a large and handsome etched depiction of a steam-powered fire engine in motion.